Would you join in the VUUV groove adventure?
We are talking about four days and nights in the hot sun between June and August, out in the cosmic nature with beautiful people and incredible vibes!

Before you go to get the tickets, we created a MUST stuff list for every event and festival, get it !

Now go get the tickets 🙂

Tickets to VuuV Festival at the > Festivals and Raves Tickets page

The VUUV Festival, taking place at the “Field Of Joy”, Germany- Putlitz , in a stunning outdoor location, surrounded by lovely meadows and pristine forest, with a small lake running nearby.
The first edition of the event took place in 1992 and the VUUV people keep spreading happiness and joy ever since then.
VUUV Festival is the perfect international gathering for Trance music lovers from all over the planet, meant to unite the international Trance tribe of people whose passion is music, dance and relax from the fast life we live. People from almost all countries of the world unite for a weekend of free love, beautiful nature and awesome music. However, the VUUV team informed that due considerations there will be no edition of the Festival at 2013, and the 22nd VuuV festival 2014 edition will take place at 2014, with a new, surprising concept. The VUUV team is going to dedicate this year for generating new ideas and progressing.

The new project of the VUUV Festival that takes place at 2013 summer, is the Festival tour in Japan, during this tour the Festival will travel to Japan for a few days (4/29-5/4) visiting a different club each day and performing the best thing that VUUV can offer, Trance music!

Another reason to wait for VUUV is the Maharani Market; the Festival offers a big market with an enormous variety of everything that comes to mind! The latest fashion at outlets from designers from Bali or Thailand will be available at comfortable prices, their handicrafts, esoteric paraphernalia and wellness products, collected with loving care by travelers who still love to share their treasures will be on offer at the buzzing Maharani Market. Furthermore we can find a big variety of food in the market that offers delicacies from all over the world, from fresh Pizza to home made Pasta, Sushi and crispy Salads with a refreshing Café Latte, Japanese Sencha Tea or freshly squeezed organic fruit juice on the side.

Near the market there is a nice bar with special drinks in friendly prices on offer!
All the food in the market is vegetarian because the atmosphere of the festival should be pure and connected to the nature, alongside the vegetarian menu; there are some more things that will convince us to help the environment, For example: at the entrance each one will deposit 5 Euros.

Visual stimulation plays an essential role in VUUV Festival. The whole Festival area, starting from the entrance, all three floors, the Maharani Market area and all spaces in between are beautified and transformed into a complete artwork which you can experience with all your senses.

As you can see in the examples, the VUUV Festival such as most of the Trance Festivals and events is always accompanied with a unique show by Laser-Crew from LBF that creates a unique new laser show which will change the standard for beam shows once again. We will dance with a 360 degrees mind blowing high impact, full color spectrum setup. LBF became the specialist in creating a surreal environment where words just are not enough to describe the feeling you get when experiencing one of their shows. So if you think you know what a laser is and what it can do, think again, LBF will show you that lasers can create new imaginary worlds and improve any Psychedelic experience!

During the Festival there were many performances, like stilt walkers in fantasy costumes, fire shows from different fire artists creating magic together, fire poi jugglers and stage dancers that will metamorphose the three dance floors into a wonderland. Get ready for an unpredictable experience!

The big stages will be the alternative stage and the main stage, during the Festival these stages will work hard and some of the most famous Trance artists in the world will stand on them.
At the 2012 edition the Alternative Floor was designed as a circus tent, and during the “Dark side of the moon” night, acts from over 5 countries played on the Alternative Floor. Genres that can be found on the alternative floor area: killer Electro acts, Ambient, Downbeat music, acts from all over the world were entertaining the visitors!
The opening on the main Floor had been performed by the Hamburg based band- the mighty and famous “S.U.N. Project”.  More eminent artists from the 2012 Fest line up are: Alter Nature (SE), Aphid Moon (UK), D-Nox & Beckers (DE), Atmos (SE), Light Child (IL), Arkaei (PL). 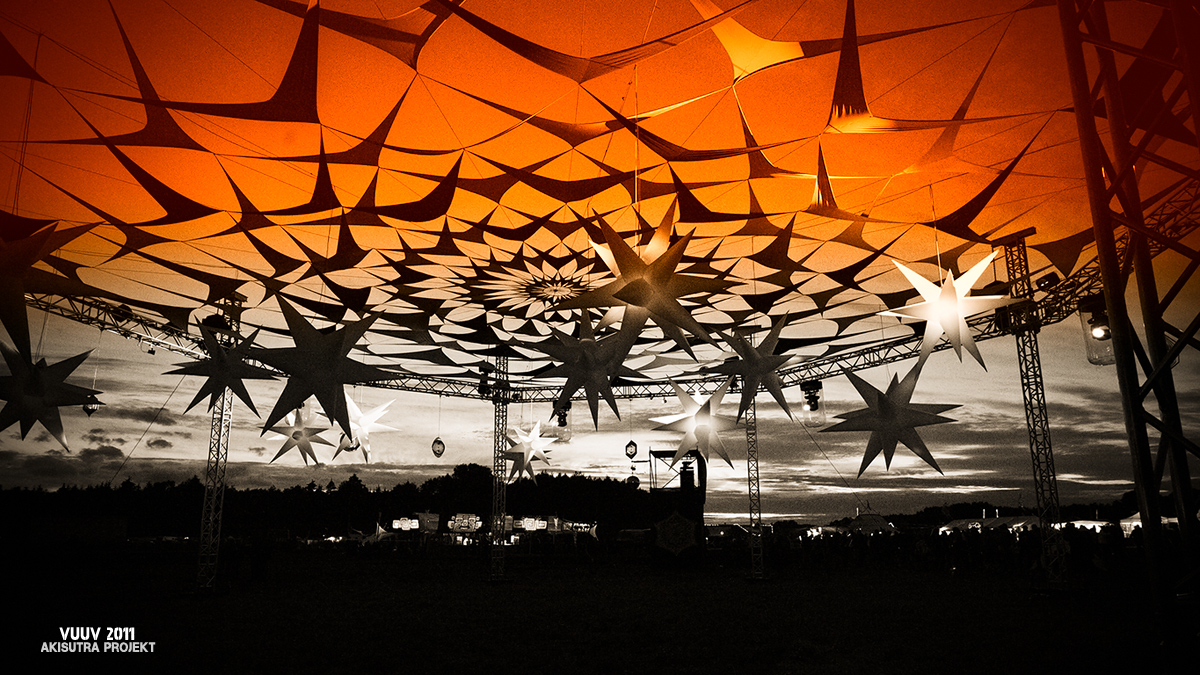 And let’s roll into a little deeper information:

VuuV Festival Line Up and Djs

Alter Nature
“Alter Nature” is Andre Johnsson, at the moment the hottest progressive artist from Sweden. He started making Psytrance at 2007 under the name “Bohemica”, a Fullon project, making him a well known name in the Swedish Psyscene, and then with time he emerged into a Progressive artist. Alter Nature is one of the fastest uprising stars in the last few years so watch out, you are about to be blown away by his sound.

Aphid Moon
Aphid Moon is the Psytrance project of producer Jules Hamer from the UK where he run’s his own label Aphid Records, producing regular digital Psytrance releases.
He performs regularly on the international Psytrance scene and in London where he is based.

Arkaei
Arkaei, winner of two consecutive national IDA showcases DJing championships and several Beat Battles, also very much enjoys playing beautifully, relaxed music. After all, it’s not always about hard-hitting drum and bass – you have to kick back and relax once in a while. He’s bringing a vast array of analogue and digital gear to perform live from a selection of chill dub bits that are way too mellow for his usual peak time sets.

Atmos
After a short bedroom DJ career, Tomasz decided to produce his own music and thanks to a natural talent, he released his first single in 1996 on Pablo Gargano’s label, EVE records. It sold very well and gave him both courage and confidence to strive for more. His influences from electronic and Ambient-Rock music like JM Jarre and Pink Floyd quickly formed a style that was to make him one of the most successful producers in Hypnotic and Atmospheric Trance.

The VUUV Festival usually works with the best sound systems in the world to provide the freakiest sound experience possible!  The location is not far from the Pritzwalk train station, the bus shuttle takes approximately 30 minutes from the station to the Festival land.For our own convenience there are always showers with hot water and toilets in the area of the Festivals.
Two advices that can help you to settle up in the festival area are:

1. If you have to bring your pet dog, make sure you keep it on leash at all times. Since we need to protect the wildlife in the nearby forests.

2. Once you have arrived and set up your camp, take some time to introduce yourself to your neighbors. You will spend some time with them, so create a small network and form communities to make your camp pleasant and safe.

The rumors say that when you enter the dimension of the VUUV Festival you’re feeling is so positive and full of love so that nothing can stop you from dancing! The organizers say that in the 20th edition it was raining badly and there was a high amount of mud everywhere but it didn’t bother anyone and the dance floor kept running normally with allot of smiles and happiness.
So when the next edition will be closer I personally recommend taking the journey to this miraculous progressive-psychedelic electronic music experience. Enjoy the amazing Laser show, the fantastic Decoration, the Psytrance, Goa Trance and be surprised by The newly arranged Festival Area.

Meanwhile keep on VUUVing people and see you on the dance floor (;