Upgrade are back with a third studio album – Evolution – and they promise yet another upgrade for their fans with more happy melodic uplifting moments, more diverse musical experiences, improved production and sound experience and a total multimedia experience. We hooked up with the duo that has been storming stages worldwide to learn more about them and the new album.

Q: Who are the people behind Upgrade? Why and how did you choose the name?

A: We are “Upgrade” – Raz Kfir and Udi Pilo from Israel. We came up with the name after some time of thinking of a name for our project and after many suggestions – The name came up. We thought the name is suitable for what we want to say in the music… We both had solo projects and we thought two people are better than one – So “Upgrade” was the right one at the right time ?

…WE TOOK THE SOUND AND PRODUCTION TO A WHOLE NEW LEVEL, PERFECTING THE SMALL DETAILS IN THE MIX AND PRODUCTION AND ALWAYS KEEPING UP WITH THE CLASSIC UPGRADE VIBE – MELODIC AND HAPPY MUSIC WITH A TWIST OF PSYCHEDELIC.

Q: How did you meet and how was Upgrade born?

A: We met after we talked a little bit on Facebook regarding some production and musical styles, and regarding events that Udi made at that time. After some time we met at Raz’s studio and right then and there the project was born! We started a track together – from that moment on we met more and more and created as much music as possible. 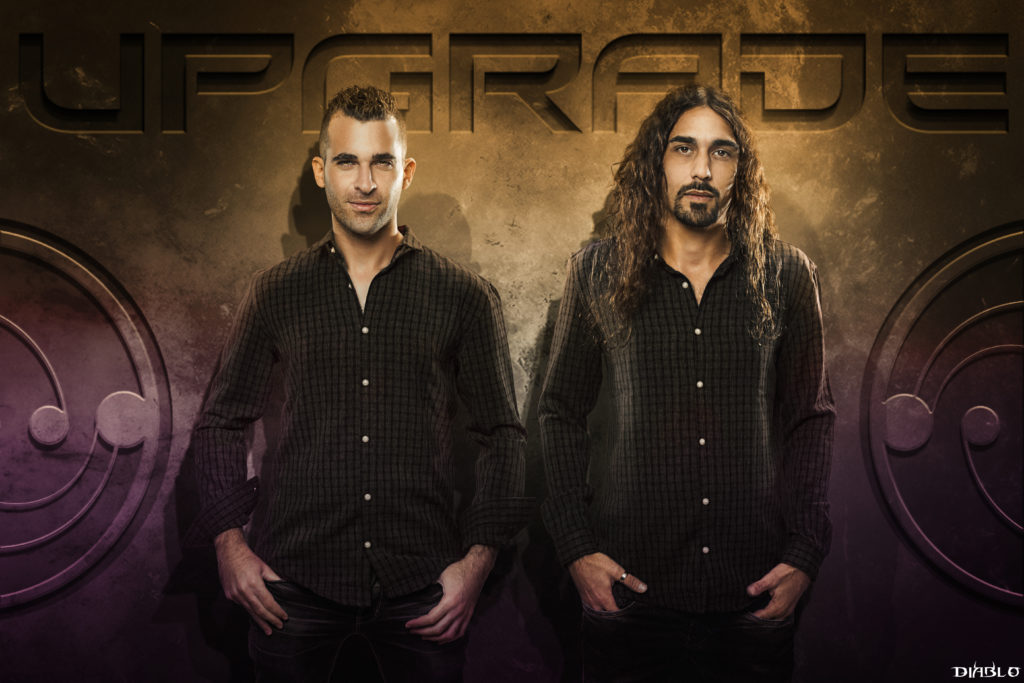 Raz: when I was at the age of 14 I went to the Spinal Club in the North of Israel, there I heard psytrance for the first time – I went to the DJ that was playing and asked him with which program is he working to create the music. That person was Erez from Infected Mushroom and he told me he is using Impulse Tracker, I ran home and started looking for that program, found it and from that moment I started to make music.
Udi: When I was 15 while I was visiting a friend he had a Mini Disc with Astral Projection music on it and there I heard Psytrance for the first time, I couldn’t believe the sounds coming out from the speakers, it was totally new for me and I completely fell in love. I felt like I found a missing piece in my life. I asked him to give me a copy and he did. I immediately became a collector of psytrance music and been that ever since.

Q: You seemed to have entered the psytrance world by storm – at one stage , Upgrade was a new project and next, you were everywhere – was it indeed like that and how did the huge exposure affected you?

Raz: When we first met we were already very experienced, each in his own field. I was making music since I was 14 years old, released 4 albums and over 40 tracks on different labels worldwide, managed Up Records from Australia and done many mastering works for artists worldwide.
Udi: I was a major part of the psytrance scene in Israel during the years 2006-2014, as a DJ and party organizer, I have been playing DJ sets since 2005 and I was an active partner in one of Israel’s leading psytrance organizations – TFN. I also had a few releases under the name Udi Pilo in 2012. While doing that, i came across many artists and promoters from the scene and gained reputation in the psytrance world.

The huge exposure didn’t affect us as humans and people (so we believe). Of course it affected our lives because we started traveling a lot and started to have a lot of positive pressure from our fans to release new music, and to come up with new ideas regarding our project and to keep being one step ahead from everybody. So in that sense of course it affects you. 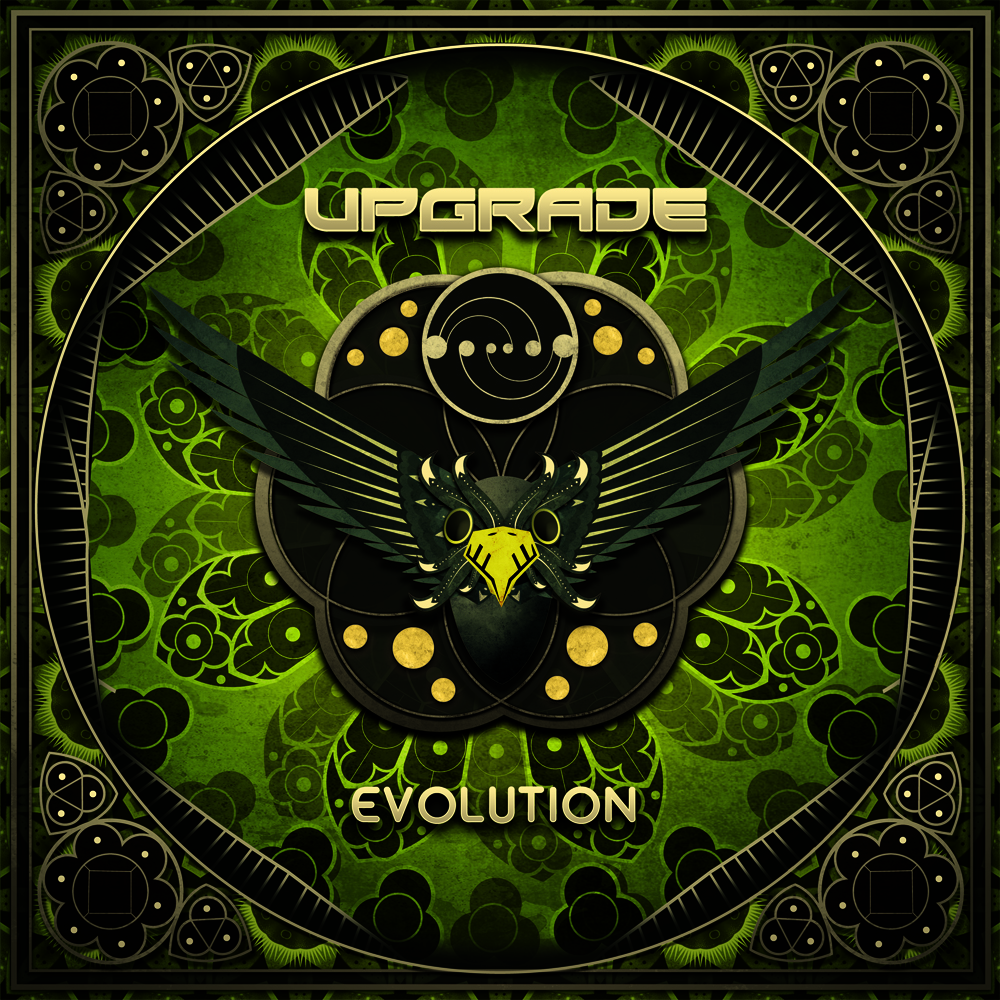 Q: New album – tell us about it! How it is different from your previous releases.

A: The new album is called “Evolution”, it’s our 3rd studio album. The name for the album came exactly because we felt we are in a stage of evolution with the music – always progressing and always trying to bring new musical experience to our audience.
In this album we took the sound and production to a whole new level, perfecting the small details in the mix and production and always keeping up with the classic Upgrade vibe – melodic and happy music with a twist of psychedelic.
In the album we collaborated with Blastoyz, Whiteno1se, Bizarre Contact And Bubble – all are good friends of ours ?
We also worked on an amazing animated video to the opening track in the album – “Life” – This video took 6 months to make. We are trying to bring a new kind of experience to our fans and to bring the world something new from us – music and visuals made in perfect harmony. The Upgrade Evolution album was made step by step with our very own video animator- Oron Aiche from Planet – who has been working closely with us for the past 4 years. We made a different animated video art for each track in the album – you can find it all on our YouTube channel.

Q: Which of your first releases is very important to you or you most connect with and why?

A: We had a release in the beginning of 2014 – a release that helped the project rise up a lot and this release was a track we both personally grew up on from the amazing artist Yahel – Waves of Sound. Yahel has been an influence on our music while we grew up until this day.
After meeting Yahel at a few random parties we hooked up and became good friends and the connection was very natural. The idea to do a remix to his track came from Yahel and we agreed at once. We chose to do that remix because it was kind of a dream for us to be able to do a remix to one of our favorite artists.

Q: Craziest adventure you had on your gigs around the world.

A: OK, so on one weekend during 2014 we had an insane weekend with 9 parties in 3 days. We started from Tel Aviv and from there going down South and getting back up to the North of Israel and then back to the South and then again to the center of Israel with no sleep for 48 hours, but we came back with 100GB of amazing crazy video footage and huge blisters on our feet!

Q: Your goals for the upgrade project?