Sonic Elysium is the project of Alexey Mamzelev, a very active man in the Psytrance and psychedelic electronic culture in Russia for a while now. We chatted with him on his music, his Skazka Festival and the general state of Psytrance in Russia.

Q: Who is Sonic Elysium? What does the name mean and why you chose it?

A: Sonic Elysium was originally founded by Alexey ‘LSB’ Mamzelev in collaboration with Igor ‘Gorby’ Gorbachev, who left the project soon after. For me it is not easy to give names to my works, and Sonic Elysium is not an exception. So it was not something to choose, but something that instantly came up to my mind like a clue after deep and intense thinking. I’d say it means our connection to the Universe, the vibrations coming from higher levels of existence, like the flow of energy in the certain form of sound waves. When I’m playing, I can’t really say that it is me – the music is coming from out there and I just take my time to record it.

Q: Do you remember the first party you went to? What was the effect of it on your life?

A: The very first party I went to happened in 2004, I guess. A small event hidden in deep sacred woods oriented mostly on the shamanic live jams and meditation practices. Someone brought a small sound system and played oldschool Goa trance hits of 90s just for only a dozen of people at the edge of camping area. No lights, no decorations, just music and a bunch of firedancers casting their magic. I still remember smiles on people’s faces shining with pure joy as they were dancing from dusk till dawn with closed eyes completely on acid. The energy of that small crowd was something I’ve never experienced or witnessed before. No other kind of music has ever affected me that way. 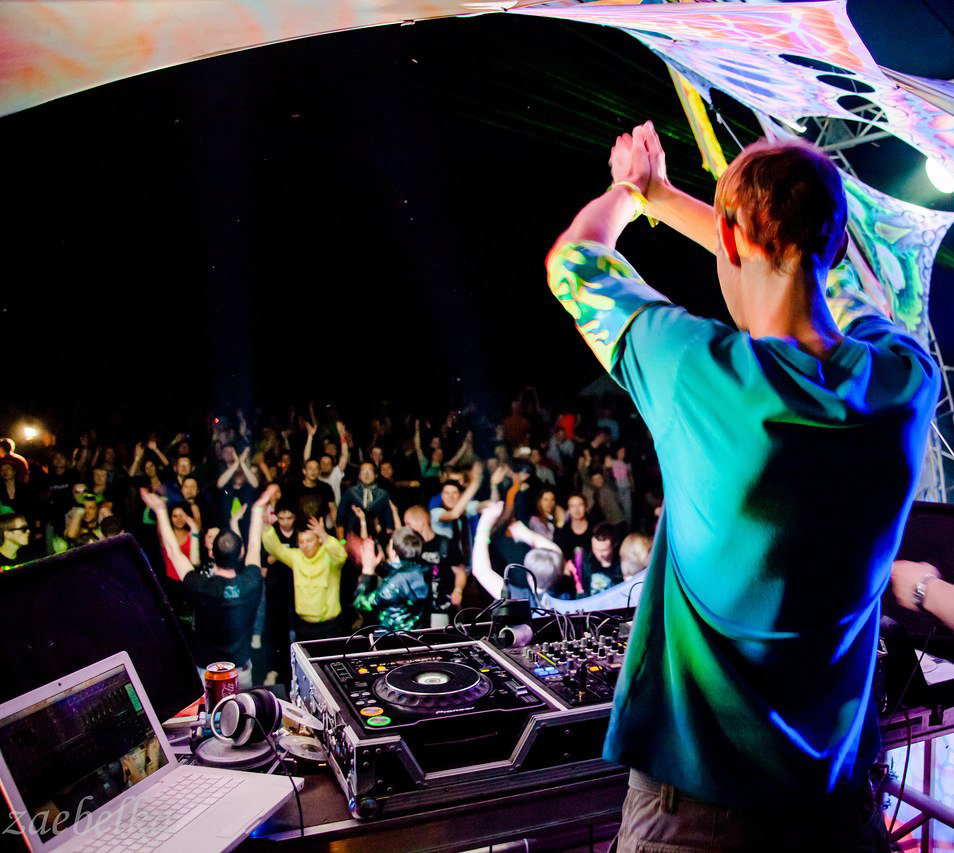 Q: You are based in Russia and have been a part of the psytrance culture there as a DJ, musician and event organizer – can you tell us a bit about the scene in Russia these days?

A: For the time being we’ve got 4 major annual festivals in the central region happening close to Moscow and St. Petersburg. Solar Systo traditionally opens summer season in the beginning of May. Then goes Trimurti – the leading summer event for already 10 years happening in June for the recent years. Celebrated in outstanding picturesque locations these two are oriented not only on psychedelic dance floors representing all the genres of Trance from melodic Goa and Progressive to the rough dark trance, but also present massive line-ups for live, Chillout and Alternative (mostly Techno) stages and a serious schedule of yoga classes, lectures and other on-ground activities. Both gather around 6000 people partying for almost a week.

For the time being we’ve got 4 major annual festivals in the central region happening close to Moscow and St. Petersburg.

July is opened by the brand new Abstraction festival. Successfully developed for the past 3 years into the second largest festival in the St. Petersburg region, it gathers up to 1500 people at 3 stages of Psytrance, Chillout and Techno, well organized by a collaboration of 3 different promo groups. Next goes the Chillout Planet happening in the mid of July for 4 years already under the label of the eldest Russian psychedelic community well known for their outfit brand sold worldwide. Oriented mostly on twilight and dark trance this one is more famous in the underground psy-lovers community.

Check out Skazka Festival – we love it!

The festival season is traditionally closed in the end of august by the Skazka Festival that I have been successfully organizing for 3 years already. This year we’ve gathered 1500 happy freaks and we keep on growing. The Main stage is the realm of Goa Trance music. I’ve been raised on tunes of Astral Projection, Cosmosis, Shpongle and so on, I love it and I see the lack of it on today’s scene.

Sonic Elysium made for us a playlist with music that inspired him – check it out:

We’ve also got some fullpower and twilight time as well as daytime psyprog music. And yet oldschool vinyl sets and pure Goa trance live acts of the headliners and famous Russian DJs and producers are most significant. The Live & Chillout stage gives opportunity to live bands from all over our vast country to share their talent and got spotted at a rather big event. Oriented mostly on Ethnic, Reggae and Downtempo music, this stage has a warm atmosphere full of smiles and happy faces, giving such a nice chance to wake up in the woods by the sound of sitar and gentle singing of the forest fairy! The Alter stage is the arena of Broken Beats with a massive lineup of Drum’n’Bass music, the unique phenomenon at our scene that gives both potential to bring young fresh blood into the trance family, and a creative surprise to the old ravers.

To mention, some underground open air parties are happening throughout the season as well as the indoor club events throughout the year. Today’s leaders of the indoor events segment are the Trance Lovers Nation and the famous Aerodance Corporation, still doing just a couple events per season, and the community of BK Freaks supporting the underground movement, both indoor and outdoor.

Q: Psytrance in Russia used to be big, and the Russian scene has been an important part of the global psy movement, but it seems that in the previous 10 years things have gone down – less events, leading artists and DJs do not come to play in Russia a lot – what had happened?

A: True, the beginning of the past decade was the peak of Russian psytrance movement. The scene has reached the mainstream level say 10 years ago – at that time we’ve got like 3-4 psytrance parties almost every weekend only in Moscow. At that time you just had to say ‘trance party’ to get your crowd. Ever since most of the major promoters have started different business, some other got either broke or bored of it. That’s why nobody took care of promoting the genre and the scene itself. The existing audience got completely fed up of same headliners brought here dozens of times, yet bringing new ones became risky. Finally, economic crisis made currency exchange rate double against Ruble, so every foreigner is twice more expensive for us now to bring here, yet we can’t raise entrance price to compensate it because people have now less funds to party. So you have to bring top rated star headliner and make huge commercial and advertising efforts to get at least 1000 people crowd struggling to break even. On the other hand, we’ve got a new underground movement rising with some events happening once or twice a month. Also the global trend of progressive psytrance has reached the mainstream level and has affected DJs of completely different stages. You can hear some psyprog tunes at uplifting trance party or even at the EDM festival, so it can bring young blood into the psytrance family. So I hope the falling trend is passed and we’re rising up again.

Q: You are working on a new album – tell us about it

At the time being I’m working on my third full length album. My music is always a mixture of different styles, and the forthcoming album is not an exception. This time I’m going to try myself for a couple of tracks in progressive of 136-138 bpm, which is new and interesting for me. Yet most of the album would be my authentic composition of powerful 145-147 bpm. And I would also surprise you with some classic Goa Trance tunes. As always, all of my works would be melodic, rich in harmonies and emotions. New good thing about it is perfected sound: crystal clarity and solid power I’ve achieved when I upgraded my studio and learnt some new engineering tricks, which I intend to show in a series of educational videos after the album release. Anyway, I hope to finish it in 2017. Some unreleased tracks I’m already playing worldwide.

The musical direction of Sonic Elysium is on the edge of Goa and Psytrance. I take all that I like in the subgenres and mix it into authentic fine blend. Analogue leads rich in melodies reinforced by the driving bass lines and percussions flavored with magical sound effects

Q: Can you describe to people what is the musical direction of Sonic Elysium?

A: The musical direction of Sonic Elysium is on the edge of Goa and Psytrance. I take all that I like in the subgenres and mix it into authentic fine blend. Analogue leads rich in melodies reinforced by the driving bass lines and percussions flavored with magical sound effects, powerful mantras and chantings with a pinch of oldschool 303 acid makes it a nice combination to deliver the ultimate experience of pure joy, driving the dance floors into ritual ecstasy. I like the music that makes me shiver and want to dance. Everybody knows that feeling of goosebumps throughout the body when you hear good music. 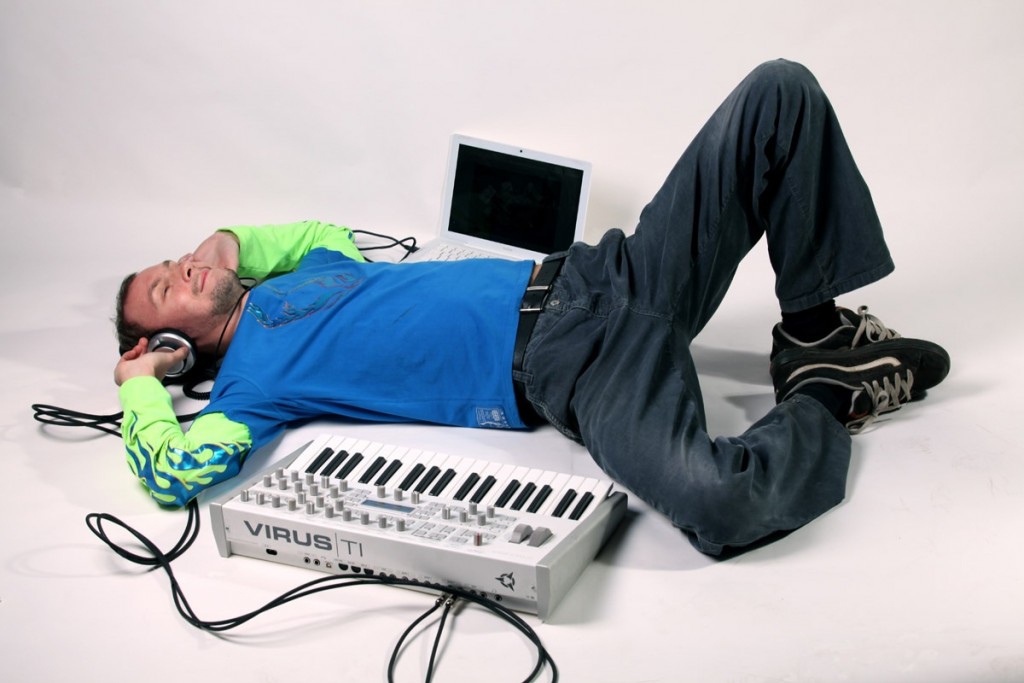 A: For the time being I’m working on my third full length album and the concert program. We’re reworking the present material with my band to perform with powerful live drums and ethnic singing and chantings, and the beloved violin, of course. The plan is to see at least 10000 happy faces from the stages of the world’s greatest festivals this summer of 2017!