Keep it Psychedelic – DJ Regan (Nano) on his new compilation

Nano Records was one of the freshest things that happened to Psytrance when it first emerged from Cape Town, South Africa 15 years ago in 2002. Since then the label has turned into one of the strongest moving forces in Psytrance culture. The man behind it, Regan Tacon – DJ Regan, has just released a new compilation with a name that carries a very clear message: “Keep it Psychedelic”, featuring 18 tracks from artists such as Tristan, Avalon, Dickster, Outsiders, Laughing Buddha, Dust, Burn in Noise, Braincell, and many others, including 3 collaboration involving the man himself. We hooked up with Regan in an email interview to learn more about Nano Records, his journey through Psytrance, and the new compilation.

While you read, listen to “Keep it Psychedelic”:

Q: How did you discover psytrance?

A: I had already been DJing and collecting dance music for a few years when my aunt living in the UK sent me some vinyls I had asked her to buy for me – since I couldn’t get them in South Africa – and in the bundle there were some extra records the guys at the record store said I should try out, which were some of the very first Goa Trance releases and the Union Jack album. When I heard the Goa stuff I was like: ‘..this is it! This is what I have been looking for!”. I was always the guy at the record store buying the weirdest and hardest trance and techno that no other DJs in Cape Town seemed to be into, but once I found the Goa sound everything became clear, finally there was a genre that was exactly the sound and vibe I was hoping for.

A: I remember my first proper dance floor moment to dance music / 90’s rave beats. It was at a club in Cape Town in the early 90’s called Deviate. It was upstairs from a Goth / Industrial / Alternative club I used to go to called The Playground. One night I wandered upstairs and it was a total different vibe. From the dark heavy energy and black and white decor to suddenly everyone tripping their tits off hands in the air with bright coloured decor and lights blasting. At first I just kinda sat around and checked it out, then I heard a track that I knew, The Prodigy “No Good (Start the Dance)”, and I got on the floor and started dancing and I didn’t leave the floor till the music stopped. A few years later the Goa scene and its music started to creep into the parties in Cape Town and I was even happier!

Q: When did you decide to be a DJ?

A: I have been a musician since I was 13, playing in bands since I was 15, and always collecting music manically. Above anything else I’m a music addict. So when I got into dance music I was collecting it and going to raves and parties and knew it was the next step for me to understanding the music because I wanted to be making the music too. At the same time I was at University and had joined the campus radio station there. After a few months the station director’s asked me if I could do a specialist radio show twice a week playing underground dance music, whatever I liked, so I went for it. I pretty much learnt to mix live on air, my listeners were very patient ?

Q: How did Nano Records come to be?

A: Just prior to starting Nano I was in a Studio and DJ duo with a close friend of mine Ans, and when he decided he was going to leave South Africa and head back to the UK where he was from, I started making plans to start my own label and set up a studio with my brother. Ans saw all the energy I was putting into it, so he suggested even though he was headed to the UK we could start the new label together still. So around 2000 we started making plans together, all three of us. It was a huge help having the UK and South African angles to start with. The whole point was create a home for our music and that of our mates, and for a large part that is still the case, although we now have a much bigger friend network !

Q: New compilation- tell us about it. How is it different from previous compilations?

A: ‘Keep it Psychedelic’ differs from past comps on Nano as its more focused on a specific vibe than some of our other comps. Often we have used the comps to showcase the wide variety of sounds we have on the label, but this one is more focussed and showcases only the full-on side of the label. The plan is to turn it into a series, so this is part 1! I must say however, that even though this comp is full-on based we still have a bunch of super cool proggier stuff on the way, and it’s all psychedelic in its own way too. I’ve named this compilation “Keep it Psychedelic” for a number of reasons. For starters it’s a catch phrase we have used for Nano for a number of years already now that sums up our attitude for the label being a place for quality psychedelic dance music, and is a bit of a mission statement for us. So it reaffirms that mission statement. The title is also a comment about the current state of PsyTrance and the trend following/jumping mainstream elements currently getting involved in the music side of things with the scene, all of which has pros and cons – but that’s for another discussion. 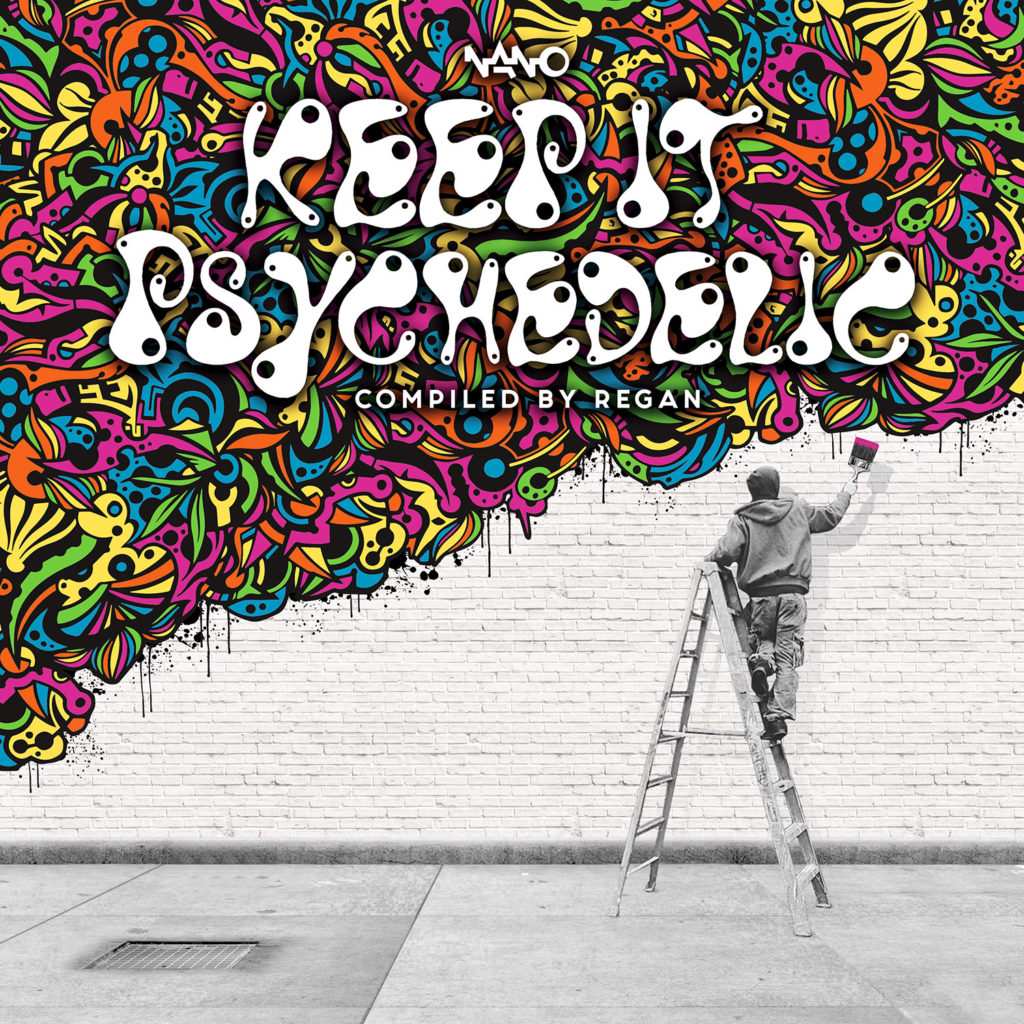 Q: How do you find the balance between music and business now that you are both a DJ and a label owner (and many other things, we know..)?

A: Honestly I don’t find a great balance. It’s a lot of long days and late nights, and often it doesn’t feel like my life is balanced at all, but I always try to make as much time as I can for some downtime with my wife, daughter and friends too. I definitely have too much on my plate at any given time, but the hard works pays off I feel. Sadly it does mean some things take longer to get to, which ain’t ideal either.

ONE NIGHT I WANDERED UPSTAIRS AND IT WAS A TOTAL DIFFERENT VIBE. FROM THE DARK HEAVY ENERGY AND BLACK AND WHITE DECOR TO SUDDENLY EVERYONE TRIPPING THEIR TITS OFF HANDS IN THE AIR WITH BRIGHT COLOURED DECOR AND LIGHTS BLASTING.

Q: Which of the first Nano releases is very important to you or you most connect with and why?

A: So many still resonate loudly for me. ‘Emergence’ our first comp, that was so exciting and fun to do, we were just going for it and trying to push a different vibe to what was on offer at the time. One track on that release was by ‘Boogi Section’ which was just a silly name we used for a collaboration track we did that was myself, my bro, Protoculture and DJ Starspine, we smashed through that track, just bouncing off each other, it was such a laugh. The first Protoculture album was a big moment of course, with all its commercial success that really brought him and the label a lot of attention, and our Hydrophonic album (which I co-wrote with my brother) has some intense memories, since we really pushed ourselves on a ridiculous deadline, which we set ourselves, to get that album written – but it worked. We were working solidly for months, working till late every night sleeping a few hours and then getting up and carrying on. Rolling from the bedroom to the studio for weeks and weeks. We didn’t have Facebook or Youtube back then, less distraction was good.

Q: If you have to choose one track (yeah, we know, it’s not fair) that most represent the spirit of psytrance for you – what would it be?

A: That seems impossible to answer, my gut says maybe the whole Flying Rhino ‘Slipstream’ compilation, or maybe Tristan’s ‘Audiodrome’ album, or anything by Bumbling Loons, Dickster, Hallucinogen, or Cosma or maybe X-Dream ‘Intercorporal Stimulator’ .. Then again it’s pretty obvious actually, nothing will ever beat Beast “Spawn”.

Q: Tell us a bit about the psytrance culture in South Africa.

A: The culture in SA is great! People there love to blast and have a good time, but it’s not as freaky as say Europe or Goa is, which has its pros and its cons of course. On the plus side, there is a wide audience of psytrance fans and people who love the music and the parties, and I think that’s one thing it has over some other countries, new people are coming into the scene all the time, and it’s great that this can happen. The parties in SA are super high quality, with amazing venues, decor, sound-systems, DJs and a relaxed vibe, the scene is incredibly spoilt for choice!

A: For me, more music of my own. It’s great to be writing more music again myself. I have three collabs on the new compilation, and have just finished a track with Tristan that we are both super stoked about, it’s huge!! Hopefully I can find some time to develop my own solo tracks more soon. It’s hard time-wise running the label, gigging and producing Origin Festival and other label events to find the gaps, but it’s happening more and more, so let’s see where it all lands. Plus I have a little surprise up my sleeve too, a collaboration project with a mate that might surprise a few people. Lets just say it’s quite musical and will follow few rules.

As for Nano, we have some amazing artist albums on the way, a bunch of remix albums too, some compilations that will probably follow along the guidelines of being more niche and focussed, which I think is nicer for the fans. We have some new options starting soon for fans to get our music and merchandise while supporting the label and our artists, and more label events in time too! Plus we are about to announce a very special collaboration for 2018 between Nano and some friends that will lead to some very interesting concepts and music!
2018 is gonna be big for sure!